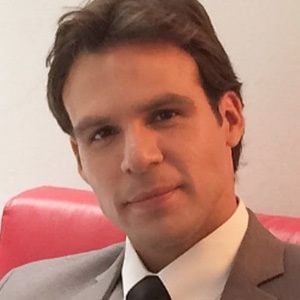 Colombian film, television, and theater actor who is known for his recurring television roles on both the Caracol network as well as the RCN network. He is recognized for having portrayed Abogado Felipe on the series La Niña as well as Pancho in La Viuda Negra.

He studied acting at the University of Colombia and made his television debut in 2005 when he starred on Padres E Hijos. His feature film debut came later on in 2007 when he starred in La sucursal del cielo.

He was nominated for a TVyNovelas Award in 2015 for his work as Efrain on the series La Ronca de Oro.

He was in a relationship with Alejandra Montoya until mid-2019. Later that year, he began dating Luz de Sol Neisa and in August 2020, they welcomed their first son named Mateo.

He starred alongside Ana María Estupiñán and Diego Vásquez on the Caracol original series La Niña.

Álex Adames Is A Member Of