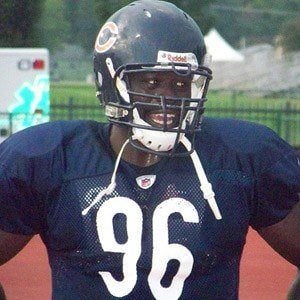 Former NFL defensive end who spent eight of his nine years in the league with the Chicago Bears. He was a defensive force at the University of Florida, where he was named SEC Defensive Player of the Year in 2001.

He attended Hamilton County High School, where he won the state championship in discus throwing.

Following his retirement from the NFL in 2010, he became the host of the Chicago sports show "The Dez Clark & Alex Brown Show".

He and his wife Karimar filmed an ad urging people to sign a petition to make June Cancer Survivors Month.

He made a Super Bowl appearance alongside Bears Quarterback Rex Grossman following the 2006 season.

Alex Brown Is A Member Of