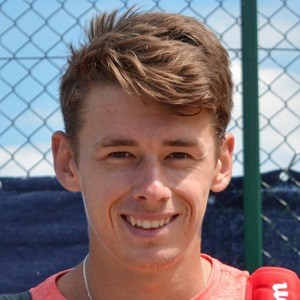 Junior Grand Slam doubles champion at the Australian Open in 2016 who became a top 100 player in the ATP singles rankings.

He debuted professionally at the Spain F22 in July of 2015, reaching the quarter final.

He was the youngest player to play in two consecutive ATP semi-finals since 2005 when Rafael Nadal did it.

He and his younger siblings Dani, Cristina and Sara were born to a Spanish mother and Uruguayan father.

He made his Davis Cup debut in February of 2018 against Alexander Zverev Jr. and fell just short of a huge upset.

Alex de Minaur Is A Member Of