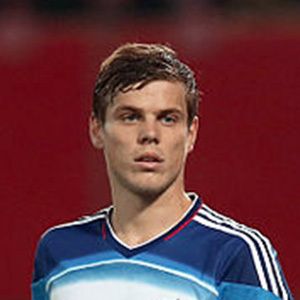 Russian professional football player who is known for his work as a Forward and Winger for the Zenit Saint Petersburg club. He is also known for having played for the Dynamo Moscow club as well as the Russian national team.

He started his youth career playing for the Lokomotiv Moscow club during the 2000 season. He played with the club until 2008 when he joined the Dynamo Moscow club, making his professional debut. That same year he also started playing on the Russia Under 17 national team.

He is known for having won the Russian cub and Russian Super Cup during the 2016 season as part of the Zenit Saint Petersburg club.

He was born and raised in Valuyki, Soviet Union

Other professional football players also known for their work as a midfielder on the Russian national team include Roman Neustadter and Alan Dzagoev.

Alexander Kokorin Is A Member Of