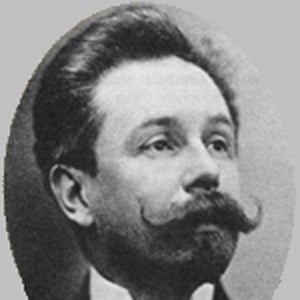 Russian Symbolist composer and pianist whose work was both influential and controversial. He pioneered an atonal and dissonant musical system without any influence from Arnold Schoenberg. He said he was inspired by mysticism, synesthesia, and theosophy.

He was a student at the Moscow Conservatory where he was awarded the Little Gold Medal in piano performance upon his graduation in 1892.

His hands were unusually small for a pianist. After damaging his right hand, it was predicted that he would never recover.

His family was of aristocratic blood, and his father and uncles boasted careers in the military.

His early work was influenced by Frederic Chopin's lyrical and idiosyncratic tonal language.

Alexander Scriabin Is A Member Of