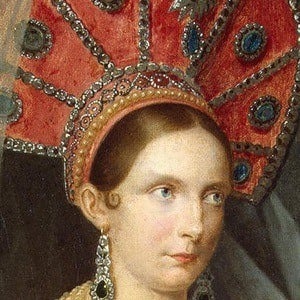 The last Tsarina of Russia from 1894 to 1917 who was murdered with the rest of her family by members of the Bolshevik Revolution. She and her reliance on the mystic Rasputin were used as scapegoats by the Russian people for many of the country's ills.

She fell ill to diphtheria when she was young and her mother and youngest sister died of the disease.

She is one of the most famous royal carriers of the hemophilia disease, which her son Alexei was born with and was most likely caused by all the inbreeding within the Royal Family.

In 1894 she married Nicholas II of Russia.

She was a big supporter of the controversial mystic Grigori Rasputin because she believed he could heal her son's hemophilia.

Alexandra Feodorovna Is A Member Of