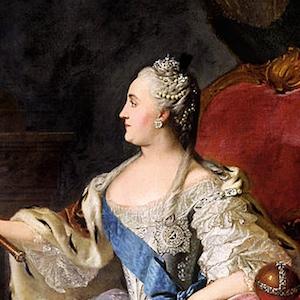 Enlightened Empress of Russia who was the longest-ruling female leader of Russia, reigning from 1762 to 1796. She helped Russia become one of the great powers of Europe and she expanded her country through military wars and diplomacy.

Although her family was royalty, they had little actual money.

Despite being a female ruler in a time where those were looked down upon, her reign saw Russia's territory expand vastly through victories in the Crimean Khanate and over the Ottoman Empire in the Russo-Turkish wars.

Her cousins, Gustav III and Charles XIII, became the Kings of Sweden. She had four children with Petter III of Russia, whom she was married to from 1745 until 1762.

She made a lot of reforms to bring her country up to modern times, just like Queen Elizabeth II.

Catherine the Great Is A Member Of