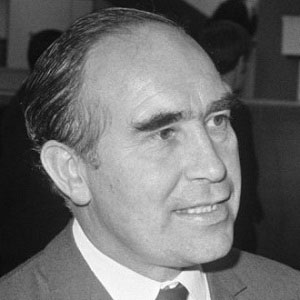 English footballer who later managed the English national football team from 1963 to 1974, and oversaw their win of the 1966 World Cup. In 2002 he was inaugurated into the English Football Hall of Fame.

He grew up in Dagenham, England and played amateur football until 1944 when he began to play professionally with the Tottenham Hotspur team.

He was also a Freemason from 1953 until 1981 when he resigned. Some of his memorabilia is displayed at his old lodge.

He married Victoria Welch in 1951.

Geoff Hurst was a member of his 1966 World Cup team.

Alf Ramsey Is A Member Of