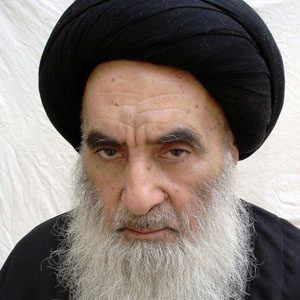 Known for heading the Hawza (seminary) in Najaf, Iraq, this Shia Islamic Marja (religious leader) was nominated for the Nobel Peace Prize on several occasions. His religious-themed publications include Contemporary Legal Rulings in Shia Law and A Code of Practice For Muslims in the West.

In his early years, he studied with Grand Ayatollah Abu al-Qasim al-Khoei. In his early thirties, he attained the prestigious Islamic scholarly rank of Ijtihad.

His official religious positions include the prohibition of dance and some types of music and the allowance of most forms of contraception.

He grew up in Mashhad, Iran, as the son of an Islamic religious scholar.

Though he was one of the few Shia religious leaders to survive Saddam Hussein's persecution, he was forced by Hussein's Ba'ath Party to abandon his mosque.

Ali Al-sistani Is A Member Of