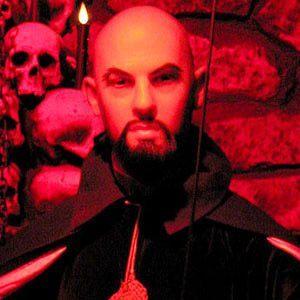 Author, occultist, and musician who founded the Church of Satan in 1966. He wrote "The Satanic Bible" in 1969 and is nicknamed "The Black Pope."

He was a photographer for the San Francisco Police Department for three years and also was an amateur psychic investigator.

He drew upon a diverse assemblage of writers to form the Church of Satan's ideology and rituals, including Ayn Rand, Jack London, H.L. Mencken, and Friedrich Nietzsche.

He left his first wife for Diane Hegarty, who would help him found the Church of Satan and was also the mother of his second child, Zeena Galatea; they never married.

He influenced the musician Marilyn Manson.

Anton LaVey Is A Member Of