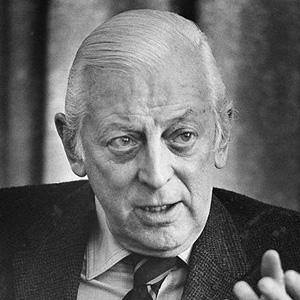 British author of Alistair Cooke's America who hosted the popular PBS program, Masterpiece Theatre, from 1972 until 1992. He is also known for writing and presenting the BBC radio series, Letters From America.

As a young man, he was the editor of the literary magazine, Granta. While attending Jesus College, Cambridge, he also organized The Mummers, Cambridge's first mixed-sex theatre group.

He became a United States citizen in 1941, after having studied at both Harvard and Yale.

He misjudged James Mason, telling him early in his career to stay out of the arts.

Alistair Cooke Is A Member Of