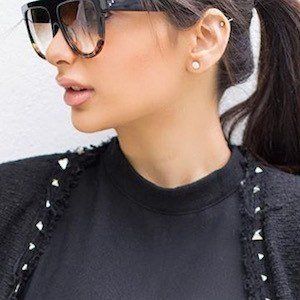 British YouTube personality and blogger who runs the channel PintsizedFashTV and the award-winning blog PintsizedFashionista.com alongside her twin sister Lailli Mirza. The sisters specializes in fashion-related content.

She and Lailli were 14 when they launched their blogging careers. They each had their own individual blogs at first. As a model, she was represented by Bareface Model Agency from July of 2010 until July of 2015.

She has worked with clients such as Gucci, Chanel, Topshop, P&G and Bobbi Brown. Harpers Bazaar Arabia named her 1 of 36 Best Dressed Women in 2012. She began her pursuit for a Bachelor's in journalism from City University London in 2014. Also an entrepreneur, she launched her own clothing line.

She and her twin Lailli work between London and Dubai. They have lived in Asia, the Middle East and the United Kingdom.

She has interviewed Kim and Khloe Kardashian, as well as Katy Perry.

Alizey Mirza Is A Member Of