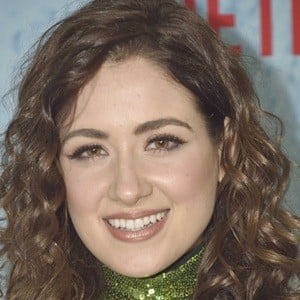 American pop singer, songwriter, and actress who has gained famed thanks to her roles on Broadway in shows like Bye Bye Birdie, Mamma Mia!, and for her voice-over work in Dora and Friends.

She began her singing career at the age of 9.

She has said that she's inspired musically by artists like Sara Bareilles, Aloe Blacc, and Taylor Swift.

She first got into performing when her mother, Patricia Trujillo, enrolled her into an acting class.

She gained greater exposure when she performed in  Adam Sandler's 2018 project, The Week Of.

Allison Strong Is A Member Of