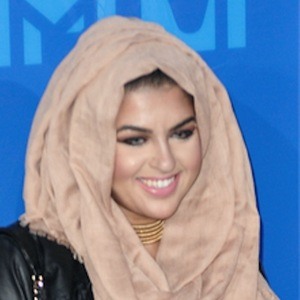 American and tech entrepreneur who has gained fame as the founder and editor of MuslimGirl.com. She was named to the Forbes 30 Under 30 in media at the age of 23 years old.

She grew up in New Jersey, but also lived in Jordan as a teenager.

She partnered with Teen Vogue in 2016 for a web series that explored issues concerning young Muslim women. In 2020, she ran for election to the U.S. House to represent New Jersey's 6th Congressional District.

She is of Jordanian and Palestinian descent.

She featured a number of topics ranging from Black Panther starring Chadwick Boseman, to Oprah Winfrey, to politics, and more.

Amani Al-Khatahtbeh Is A Member Of