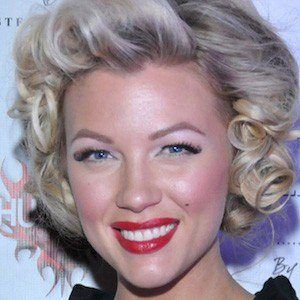 Actress and comedienne who rose to fame performing stand up comedy throughout Los Angeles and appearing regularly on the Food Network series Mystery Diners. She has appeared in films like The Square Root of 2 and Doctor Feelgood. She also does Marilyn Monroe impersonations.

She was voted class clown during high school and went on to get a degree in interior design. Thereafter, she studied at prestigious acting schools like The Groundlings, iO West and the Upright Citizens Brigade.

She began modeling in Miami and has been signed to AC Talent, Brand Models and Sirena Models.

She was born Amber Rachelle Coyle in Houston, Texas. Her younger half-sisters Brittney and Chelsey Coyle were child actresses.

She has made appearances in skits on Jimmy Kimmel Live.

Amber Coyle Is A Member Of