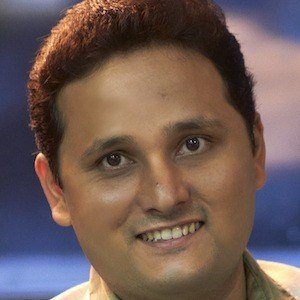 Indian author known for writing the Shiva Trilogy, which is made up of The Immortals of Meluha, The Secret of the Nagas, and The Oath of Vayaputras. He released Scion of Ikshvaku, the first of the Ram Chandra Series, in June of 2015.

He studied at the Indian Institute of Management and worked in various financial capacities for nearly a decade and a half prior to publishing his first book.

With more than 2.5 million copies sold, the Shiva Trilogy broke Indian publishing sales records. In 2012, 2013, and 2014, Forbes India named him a top 100 celebrity in the country.

He and his wife Preeti Vyas have a son named Neel.

The success of The Shiva Trilogy led to the creation of a music album based on the series, which included performances by Sonu Nigam and Palash Sen.

Amish Tripathi Is A Member Of