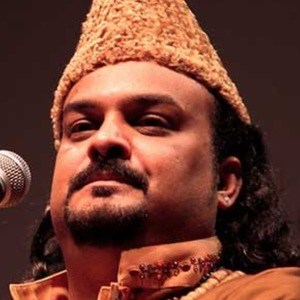 Prominent qawwali singer of South Asia who was well known for reciting poems written by his father and uncle. He was an advocate the Sufi Muslim tradition.

His origins with qawwali music began when he was nine years old. He started performing on stage when he was twelve.

He was shot dead in Karachi after two motorcyclists that were part of the Pakistani Taliban opened fire on his car.

His father was Ghulam Farid Sabri and his uncle was Maqbool Ahmed Sabri.

He was a qawwali singer like Rahat Fateh-ali Khan.

Amjad Sabri Is A Member Of