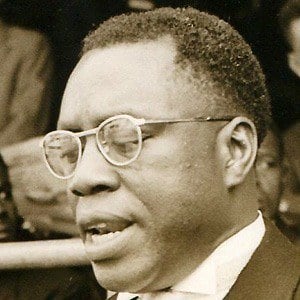 Former Prime Minister of Cameroon and the first Cameroonian to be elected Member of Parliament at the French National Assembly. He was only the second African-born Prime Minister in Sub-Saharan Africa.

He considered becoming a priest before ultimately deciding on law, earning his law degree in 1945.

He was the first political prisoner of independent Cameroon between 1962 and 1965.

He married Marguerite Embolo in 1946 and they had six children.

He was born in the same country as soccer player Roger Milla.

Andre Marie Mbida Is A Member Of