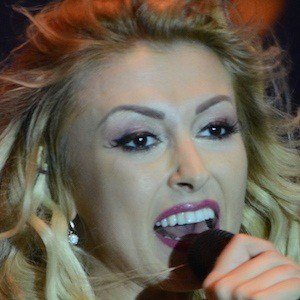 Singer known as one-half of the Romanian pop duo Andre. She participated as a member from 1998-2001, releasing 7 albums during this time. Following this time, she embarked on a solo dance and singing career.

She began singing at age 10 under the guidance of her father. In 1998, she became the first child to release a CD in Romania.

At the beginning of 2002, as a member of Andre, she received 4 platinum certifications, and 1 gold, for having sold over 1.2 million albums in 3 years throughout Romania. During her solo career, in 2011, she held more than 150 concerts during her tour, which was a personal high.

She was born in Ploiesti, Romania; but her father, Sandel Balan, and mother, Valeria, raised her here. She was engaged to Teo Păcurar but the couple eventually broke up. She had a daughter named Ella with George Burcea, whom she later married in 2017.

She shares her home country of Romania with actor Sebastian Stan.

Andreea Balan Is A Member Of