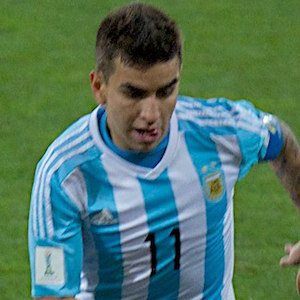 Argentine international forward who won the Copa Libertadores with San Lorenzo in 2014. He signed with Atletico Madrid of La Liga that same year.

He played youth soccer with Alianza Sport and Tiro before joining San Lorenzo. He made his professional debut in 2013.

He earned his first cap with Argentina's national team in 2015. In 2014, after signing with Atletico, he had to undergo heart surgery for a tumor.

He was born to Marcela Martinez and Angel Correa. Both his father and brother had died by the time he was 12.

He was teammates with Emmanuel Mas while playing for San Lorenzo.

Ángel Correa Is A Member Of