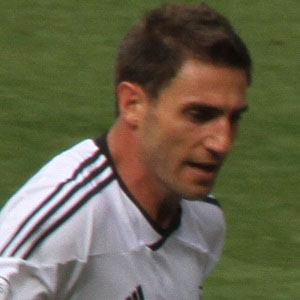 Spanish soccer player who found great success after joining Swansea in 2007, winning Football League One, Cup and Championship play-off titles. He was named to the PFA League One Team of the Year for the 2007-08 season.

He was born in the town of Sant Carles de la Rapita and began playing for CD Tortosa in 2001.

He drove around Swansea delivering food to the homeless in January 2013.

He married a woman named Nikki and has a child named Angel.

He has been teammates with Welsh defender Ashley Williams at Swansea.

Angel Rangel Is A Member Of