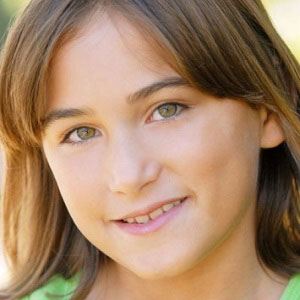 Lending her voice for the roles of Deema in Nickelodeon’s Bubble Guppies and Gabby in Blaze and the Monster Machines, she has also appeared on live-action television and in a number of theater and musical productions in addition to photo shoots for national online ad campaigns.

She took the top prize in singing for her age group with an a capella rendition of “Castle on a Cloud” from Les Miserables at the 2007 International Presentation of Performers in Los Angeles.

She began attending the New Mozart School of Music in Palo Alto to study voice and piano. She would later learn to play the flute and has been trained in jazz and hip-hop dance.

She grew up with two mini-Dachshunds, Opal and Pearl, and family horses, Talonne and Sunny.

She and Jacob Bertrand both were cast in Bubble Guppies.

Angelina Wahler Is A Member Of