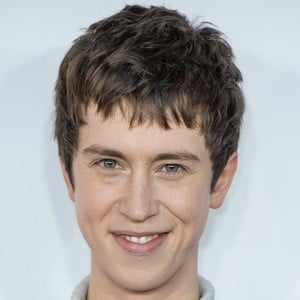 Actor who has risen to fame for his role as Josh Archer in the long-running BBC Radio 4 serial The Archers. He has also been cast as young Merlin in the 2019 adventure fantasy film The Kid Who Would Be King and as the Prince of Wales The Spanish Princess.

He studied at the London Academy of Music and Dramatic Arts between 2015-2017. He previously studied English literature at the University of Warwick.

He appeared in Nell Gwynn and Richard II at Shakespeare's Globe in 2015. He was named talent agency Spotlight's most promising actor award from The Sunday Times National Student Drama Festival in 2014.

His parents are actors Celia Irmie and Benjamin Whitrow.

He was cast to play the younger version of Patrick Stewart's character in the 2019 film The Kid Who Would Be King.

Angus Imrie Is A Member Of