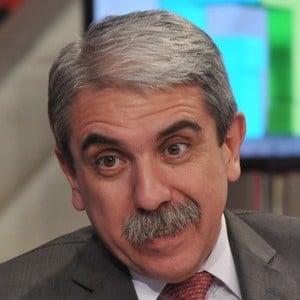 Argentine Justicialist Party politician and lawyer who is known for being a close ally to President Cristina Fernández de Kirchner. He has served in several positions within the Argentinian government including Minister of Production, Minister of Justice, and Interior Minister.

His career in politics began in public service when he started working for the municipalities of Quilmes Partido and Florencio Varela Partido in 1983. In 1991, he was elected Mayor of Quilmes and then as a member of the Constitutional Convention of Buenos Aires in 1994. He was appointed to General Secretaty of the Presidency in 2002 which began his close ties with different Argentinean presidents.

He is known for having written and published several books about Argentinian politics and his experiences in government including Zonceras Argentinas al Sol in 2012 and Zoncreas Argentinas y Otras Yerbas in 2011.

He was born and raised in Quilmes, Buenos Aires, Argentina. He is married and together they have one son.

He has been involved in several controversies including with television host Mirtha Legrand whom he referred to as "rude" and "uneducated" in January of 2012.

Aníbal Fernández Is A Member Of