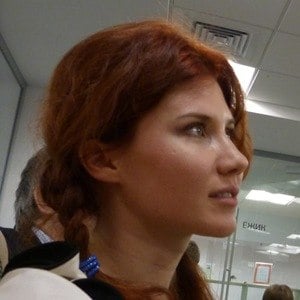 Russian spy known for her involvement in the Illegals Program, a network of Russian sleeper agents under non-official cover that were tasked with infiltrating Western countries. She was arrested in New York in 2010 and deported to Russia the same year as part of a large prisoner swap between the two countries.

She was born Anna Vasil'yevna Kushchyenko and began her deep cover assignment in the U.K. where she married British citizen Alex Chapman. This helped her obtain a British citizenship, a British passport and easier immigration to the United States.

Once she returned to Russia, she was a celebrity and has worked as a speaker, model and television host.

Her father was a senior KGB official in Nairobi, Kenya, and she gave birth to her first child, a son, in 2015.

It was rumored that she tried to lure one of Barack Obama's senior cabinet officials into a honeytrap, which is supposed to have instigated the FBI's initial investigation of her and the surrounding spy ring. The FBI has denied this rumor.

anna chapman Is A Member Of