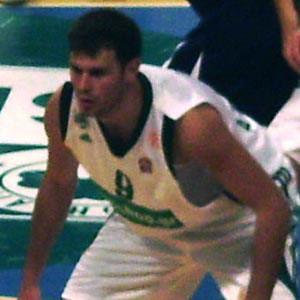 6'10" power forward and center who became captain of the Greek national team.

He debuted with the Greek League club Ilysiakos in 1996, but moved to Panathinaikos in 1997 when he was 16.

He played one season in the NBA after being selected by the Vancouver Grizzlies in the 2001 NBA Draft's 2nd round, 47th overall.

He was born in Maroussi, Athens.

He earned the nickname Batman, after the fictional character created by Bob Kane and Bill Finger.

Antonis Fotsis Is A Member Of