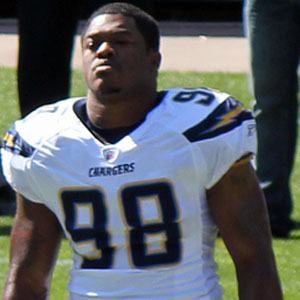 NFL outside linebacker who was selected by the Baltimore Ravens in the fourth round of the 2007 NFL Draft.

He broke the school record for total sacks at Florida International University in 2006.

He had his best single game performance on December 18, 2011 with the San Diego Chargers, when he recorded four sacks against the Baltimore Ravens, his former team.

He was born in Miami, Florida in 1984 and grew up with four siblings.

He was teammates with star Ravens linebacker Ray Lewis from 2007 to 2009.

Antwan Barnes Is A Member Of