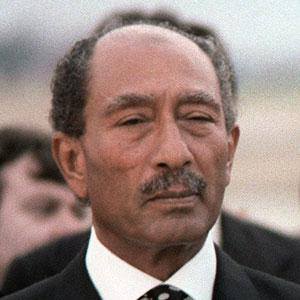 President of the Arab Republic of Egypt from 1970 to 1981 who led his country in a war against Israel in 1973, which is known as the Yom Kippur War. Four years later he became the first Arab leader to visit Israel and acknowledge it's right to exist.

In 1938, he completed his education at the Cairo Royal Military Academy.

In 1979 he signed the Egypt-Israel Peace Treaty, which won him and Israel Prime Minister Menachem Begin the Nobel Peace Prize but also directly led to his assassination.

His brother, Atef Sadat, was a pilot during the Yom Kippur War in October 1973.

He was a senior member of the Free Officers group that overthrew the Muhammad Ali Dynasty.

Anwar Sadat Is A Member Of