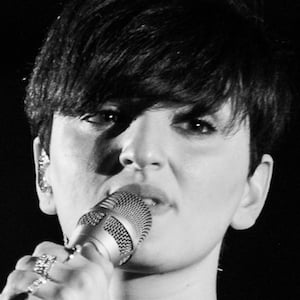 Italian singer and actress who first rose to fame after receiving the 'Mia Martini' Critics Award at the 2009 Sanremo Music Festival. She has since gone on to release numerous successful albums and award winning singles.

Born Rosalba Pippa, she began her career competing in singing competitions and earned her first success in 1999 winning first prize at the Cantacavallo competition in Teggiano.

She served as a judge on the 5th season of reality competition series The X Factor Italy.

Her stage name is an acronym of her family members' names: A for Antonio, her father; R for Rosalba, her own name, I and S for her sisters Isabella and Sabrina, and A for her mother, Assunta.

She collaborated with Guè Pequeno and the rest of Club Dogo to produce the single "Fragili" in 2014.

Arisa Is A Member Of