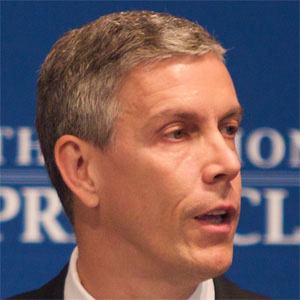 After graduating from Harvard University with a degree in sociology, he headed the Ariel Education Initiative in Chicago and helped found the Ariel Community Academy charter school.

During the late 1980s and early 1990s, he was a professional basketball player in Australia.

His marriage to Tasmanian citizen Karen Luann Duncan resulted in a daughter and a son. The Duncans placed their children, Ryan and Claire, in public schools in Arlington, Virginia.

He served as Chicago CEO of Public Schools under the mayoral administration of Richard M. Daley.

Arne Duncan Is A Member Of