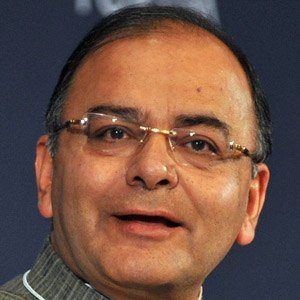 This Indian politician and attorney served his country's government as Minister of Law and Justice (from 2000 to 2004); Leader of the Opposition in the Rajya Sabha parliamentary house (from 2009 until 2014); and Minister of Corporate Affairs, Defense, and Finance (beginning in 2014). In 1980, he became a member of the Bharatiya Janata Party.

After graduating from New Delhi's Shri Ram College of Commerce, he earned a law degree from the University of Delhi.

He represented the Pepsi Company in a 2002 Indian Supreme Court case against the Coca Cola company.

His marriage to Sangeeta Jaitley began in 1982 and resulted in one daughter, Sonali, and one son, Rohan.

He and his contemporary, Nitin Gadkari, were both leaders of the Indian Bharatiya Janata Party.

Arun Jaitley Is A Member Of