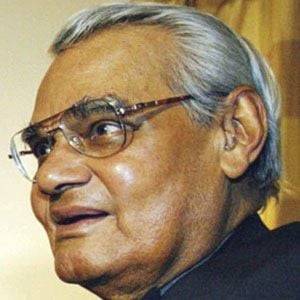 India's tenth Prime Minister who held office from 1998 to 2004. In his long political career he became the only person to serve four different states in parliament during different times.

He worked as a journalist for the Swadesh daily paper after obtaining a law degree.

He was the first Indian politician to serve as prime minister without first being part of the Indian National Congress.

He had two adopted children, Namita and Neharika, with his wife Bachelor Vajpayee.

He was succeeded by Manmohan Singh as Prime Minister of India.

Atal Bihari Vajpayee Is A Member Of