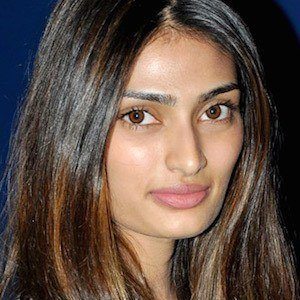 Indian actress cast in the lead female role of Radha Mathur for the 2015 Hindi film Hero, marking her feature film debut. She was also nominated for a Filmfare award for Best Female Debut.

She studied filmmaking and liberal arts at the New York Film Academy.

Her social media presence is large with more than 2.3 million Instagram followers and more than 2.4 million followers on Twitter. She has worked with the brand Maybelline.

She is the daughter of actor Sunil Shetty and Mana Shetty. She has a brother named Aahan.

She starred alongside Sooraj Pancholi in the film Hero.

Athiya Shetty Is A Member Of