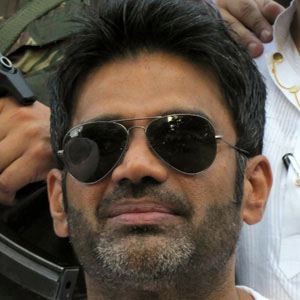 Bollywood star of blockbuster comedies such as Hera Pheri, Phir Hera Pheri, and No Problem. He established his reputation with patriotic films such as Border and LOC: Kargil, and won the 2001 Filmfare Award for Best Villain for his role in Dhadkan.

He debuted in the 1992 film, Balwaan, which met moderate success.

He starred in many action films, and was unafraid to take risks in comedy.

He had two children with Mannya Shetty.

His home state of Karantaka is reknown for its famed cricket players, Rahul Dravid and Javagal Srinath.

Sunil Shetty Is A Member Of