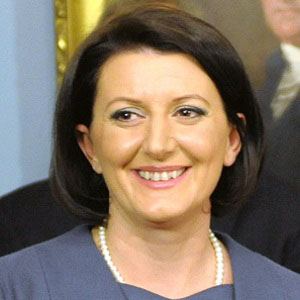 Notable as the first woman to be elected President of Kosovo, this political independent took office in April of 2011 as her country's fourth president. Before beginning her political career, she served as Deputy Director of the Kosovo Police.

After receiving her law degree from the University of Pristina, she entered a criminal law and police studies certificate program at England's University of Leicester and subsequently trained at both Germany's George C. Marshall European Centre for Security Studies and the United States' FBI National Academy.

Upon her election as President of Kosovo, she stated her intention to make her country a member of both the United Nations and the European Union.

She was born and raised in Gjakova, Republic of Kosovo. She later married Astrit Kuci.

She served as President of Kosovo during the prime ministerial administration of Hashim Thaci.

Atifete Jahjaga Is A Member Of