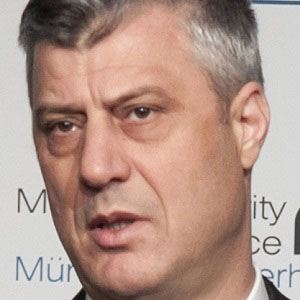 Democratic Party leader who became President of Kosovo in 2016. He previously served as Prime Minister of Kosovo in 1999, and served a second term from 2008-2014.

During the Kosovo War, he led the Kosovo Liberation Army and may have been involved in the KLA's numerous criminal activities.

He grew up in Skenderaj, Yugoslavia. He and his wife Lumnije Thaci have a son named Endrit.

He was heavily involved with the Kosovo Liberation Army, a paramilitary group founded by Adem Jashari.

Hashim Thaci Is A Member Of