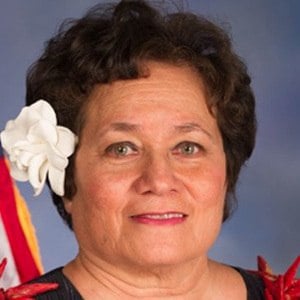 Politician who became the delegate for the American Samoa in the U.S. House of Representatives in 2015. Her full name is Amata Catherine Coleman Radewagen.

She joined the Republican National Committee in 1986 and in 2012, she became the committee's most senior member.

She served on the staffs of multiple U.S. representatives in the 1990s and 2000s, including Phil Crane of Illinois and J.C. Watts, Jr. of Oklahoma.

Her father, Peter Tali Coleman, served as the Governor of American Samoa. She married Fred Radewagen and they have three children together.

U.S. President Donald Trump selected her to be a member of the President's Commission for Asian Americans and Pacific Islanders.

Aumua Amata Is A Member Of