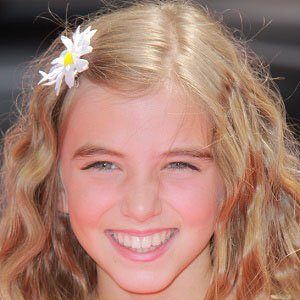 Actress and model who played Murph in the 2012 film version of The Three Stooges. She also had a minor role in the film Scarf. She took a brief hiatus from acting to attend high school in Del Mar.

She was already modeling when she was 6 months old and began dancing at the age of 3. She was acting in commercials at 4 and singing by the age of 8.

She was acclaimed for her role as Molly in a production of Annie.

She has older brothers named Ryan and Hunter.

She was in an episode of Mickey Mouse Clubhouse and an episode of Special Agent Oso, the latter of which starred Gary Anthony Williams.

Avalon Robbins Is A Member Of