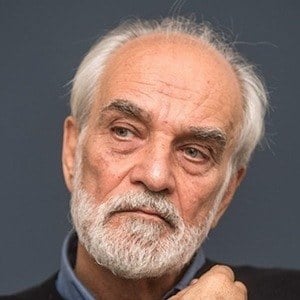 Iranian painter, graphic artist, and writer. He is known for having been awarded the Legion of Honour Award at the French embassy in Iran in January of 2016. He also shares his artworks through Instagram for his over 100,000 followers.

He attended the University of Tehran until 1967. He held his first solo art exhibition in 1975. After the revolution and eight-year war in 1979, he began making artworks out of the remaining debris and destroyed objects.

He is known for having painted several book covers for Bahram Beyzai including for Ayyarnameh, Modern Preface of Shahnameh, and Sheikh Sherzin's Scroll.

He married Firouzeh Athari in 1981 and together they had two children: Tara and Takin.

He shared a photo with composer Kayhan Kalhor to his Instagram in March of 2018.

Aydin Aghdashloo Is A Member Of