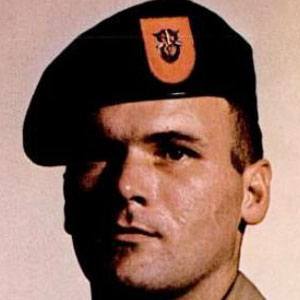 Best remembered for his chart-topping patriotic song "Ballad of the Green Berets," this singer and songwriter drew upon his military experience during the Vietnam War as inspiration for his music.

In late 1978, he shot and killed fellow country songwriter Lee Emerson Bellamy, who was the former boyfriend of Sadler's girlfriend at the time, Darlene Sharp. After serving a brief prison sentence for the crime, he moved to Guatemala where he himself was shot in the head as the result of an attempted robbery.

A native of Carlsbad, New Mexico, he spent his childhood in California, Arizona, Colorado, and Texas. He was the son of restaurant manager Bebe Littlefield and plumber John Sadler.

He and fellow singer Jan Howard both recorded hit country songs in 1966: "Ballad of the Green Berets" and "Evil on Your Mind," respectively.

Barry Sadler Is A Member Of