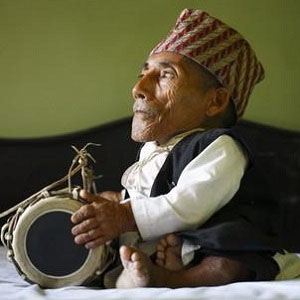 Afflicted with primordial dwarfism, Dangi broke the world record for shortest man to have ever lived. He reached an adult height of only one foot and 9.5 inches.

Before becoming internationally famous for his short stature, he led a quiet existence as a craftsman and farmer.

In late 2014, he made the acquaintance of the tallest man in the world, Sultan Kosen, who at eight feet and three inches tall, towered over Dangi.

A native of Kalimati, Nepal, he spent his adult life living with his nephews in a Nepalese village.

He and the shortest woman in the world, Jyoti Amge of India, were photographed together for the 2013 edition of the Guinness Book of World Records.

Chandra Bahadur Dangi Is A Member Of