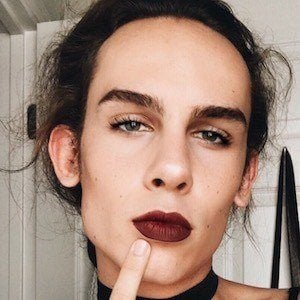 YouTube star known for his fashion and makeup videos as well as gender nonconforming style. He has more than 80,000 subscribers. He runs the style blog Behave Normally.

He started uploading videos in 2010. One of his first videos was entitled "Yes, I Am A Boy" and has over four million views.

He stated in a video that he's simply a man who likes things that are traditionally associated with women and has no interest in changing gender. He's also a dancer.

His mother works as a stage manager and helped produce Steve Wynn's Showstoppers in Las Vegas.

He made a makeup tutorial video inspired by Miley Cyrus's "We Can't Stop."

Ben Green Is A Member Of