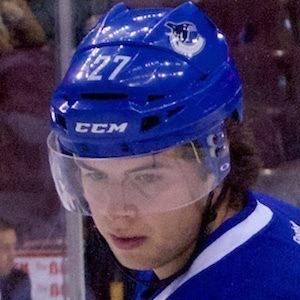 Ice hockey defensemen who was a 2012 fifth round pick of the Vancouver Canucks. He made his NHL debut in 2015 and became a consistent contributor on the blue line, hovering around 20 minutes of ice time per game as a rookie.

He spent three years at the University of Maine after being drafted, earning All-Hockey East first team honors in his second season.

Although expected to need time to develop after ending his college career and joining the Canucks organization, he only played four games for the Utica Comets of the AHL before making his NHL debut.

He was born to Jim and Janet Hutton and has a sister named Maggie.

He and Dan Hamuis played together on the Canucks.

Ben Hutton Is A Member Of