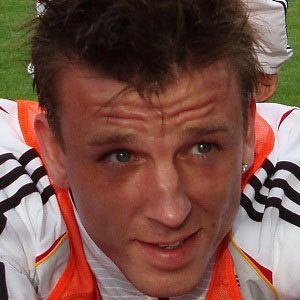 German former soccer player nicknamed "Schnix" who is best remembered for his long stints with the clubs Carl Zeiss Jena and Bayer Leverkusen. He also represented Germany at events like the 2002 and 2006 FIFA World Cup.

He was born in the town of Jena and played youth soccer with BSG Aufbau Jena from 1980 to 1983.

He became a scout at Bayer Leverkusen following his retirement from playing.

He has a son named Giovani and a daughter named Emely.

He was managed by Jurgen Klinsmann on the German national team.

Bernd Schneider Is A Member Of