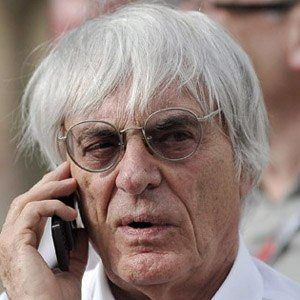 British business magnate who became the president and CEO of Formula One Management in 1978 and is known as F1 Supremo. He was ranked by Forbes to be the 4th richest person in the UK in 2011.

He left school at the age of 16 to work at the local gasworks and later went into business trading in spare parts for motorcycles.

He entered two Grand Prix races as a driver, during the 1958 season, but failed to qualify for either of them.

He has two daughters with his second wife and was married for a third time in 2012.

He signed the Austrian double world champion Niki Lauda in 1978 while running Brabham.

Bernie Ecclestone Is A Member Of