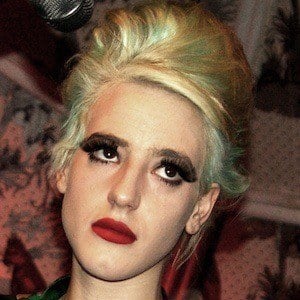 English singer and multi-instrumentalist known to fans for her eclectic mixture of punk, blues and psychedelic rock. She released her first album, 2012's Yours Truly, Cellophane Nose, backed by the band Hooves of Destiny before going solo under the name Du Blonde for 2015's Welcome Back to Milk.

She dropped out of school at age sixteen and taught herself to play guitar on a Fender Stratocaster.

She collaborated with Future Islands frontman Samuel T. Herring in 2012 and 2013. The pair co-wrote songs like "Pelican Canyon."

Both of her parents were graphic designers. Her mother was also a folk musician.

She and Hooves of Destiny performed on Later...with Jools Holland in April 2012.

Beth Jeans Houghton Is A Member Of