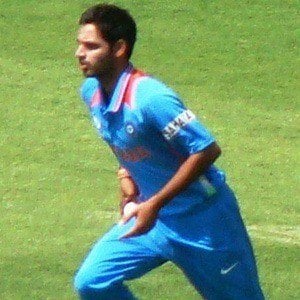 Bowler and lower-order batsman who's represented India in both Tests and ODIs. He's played in the IPL for Royal Challengers Bangalore, Pune Warriors India, and Sunrisers Hyderabad.

He made his debut with Uttar Pradesh at the age of 17 against Bengal. He earned his Test cap in 2013.

He became the first bowler ever to record his debut wickets in T20Is, ODIs and Tests bowled.

His father Kiran Pal Singh was a sub-inspector for the UP police.

In the 2008-2009 Ranji Trophy, he dismissed Sachin Tendulkar for a duck, the first time Tendulkar had been dismissed without scoring in a first-class match.

Bhuvneshwar Kumar Is A Member Of