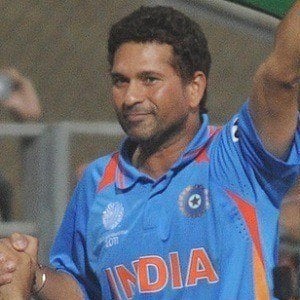 Former Indian cricket star who is considered one of the best batsman in history and is widely known as the "God of Cricket." He recorded 100 combined ODI and Test centuries and scored more than 30,000 runs between the two formats.

He was a bully during his young years and was introduced to cricket at age 11. He debuted with India's Test side only five years later.

He earned many honors in his career, including Wisden Leading Cricketer in the World in 2010 and the Wisden Cricketer of the Year in 1997.

He married Anjali Tendulkar in 1995. They have a son named Arjun and a daughter named Sara.

In 2002, he was ranked the second-best cricketer in the world by Wisden, or the Bible of Cricket. The number-one ranking went to the legendary Don Bradman.

Sachin Tendulkar Is A Member Of