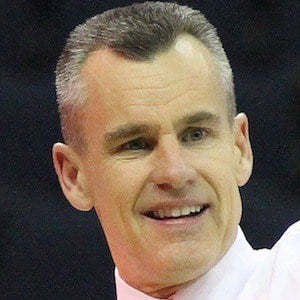 Basketball coach who led the University of Florida to seven Elite Eights, four SEC Tournament Championships and two NCAA Championships. In 2015, he was named head coach of the Oklahoma City Thunder.

He played point guard for coach Rick Pitino at Providence College and then spent a year playing for Pitino in the NBA with the New York Knicks. After his brief professional career, he served as an assistant coach under Pitino at the University of Kentucky.

He has four sons with his wife Christine Donovan.

He won back-to-back NCAA titles with Florida in 2006 and 2007 with a strong, balanced team that included future NBA players Joakim Noah, Al Horford and Corey Brewer.

Billy Donovan Is A Member Of