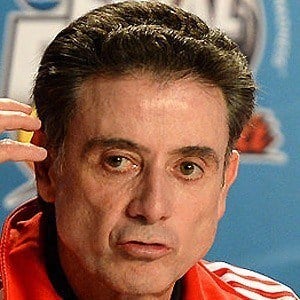 College basketball coach who led three different schools to the NCAA Final Four. He won his first NCAA Championship with Kentucky in 1996 and his second with Louisville in 2013.

He had an inauspicious coaching start at the University of Hawaii, who was cited by NCAA for violations involving gifts to players.

He briefly coached the New York Knicks and Boston Celtics in the NBA but had little success.

He had six children with Joanne Minardi, whom he married in 1976.

In his freshman year at the University of Massachusetts he was teammates with "Dr. J" Julius Erving.

Rick Pitino Is A Member Of